Summary and rough estimate of deaths from occupational diseases due to exposure to mineral dusts or mineral fibres (incl. asbestos) in Finland

The majority of deaths from occupational diseases in Finland have been caused by asbestos. Restrictions on the use of asbestos were imposed decades ago, but the delays between exposure and the occurrence of exposure-related diseases are very long. Until now, only few deaths from occupational diseases related to exposure to mineral dusts or mineral fibres have been registered among those born after 1956.

The aim is to establish an overall picture of asbestos-related deaths over a long review period. The statistical system in its current form was introduced with a method of electronic data collection in the early 1980s. The earliest cases included in the review occurred in 1967, but the coverage of the registering of occupational diseases did not improve until from 1991 onwards. This was due to the new workers’ compensation laws on occupational diseases of the late 1980s, asbestos screenings of occupational diseases and extensive asbestos studies.

This is a very difficult subject to analyze, with a high number of underlying factors affecting in different directions. Furthermore, there is no national level statistical data available on the rate and duration of individual worker’s exposure. In the following, a few challenges behind how to interpret the data:

Key findings on the register data

Until now, only few deaths from occupational diseases related to exposure to mineral dusts and mineral fibres have been registered among those born after 1956 (only total of 12 cases in the data). The big question is whether they reached the working age before the asbestos bans and were exposed to asbestos to such a degree that a significantly higher number of such cases will be identified in the next few decades. In these age cohorts, smoking was reportedly very common among the working population, which is still likely to affect the statistics in the future. On the other hand, the data clearly indicates that new cases have hitherto occurred up to the age of about 88−94 (NB: In this rapid analysis, age was roughly calculated, i.e., the accuracy of age is +/-1 year). 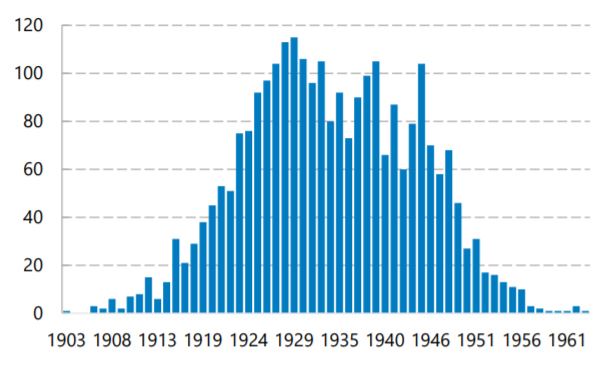 Figure 1. Deaths related to exposure to mineral dusts and mineral fibres in the register data according to the year of birth of the individual. 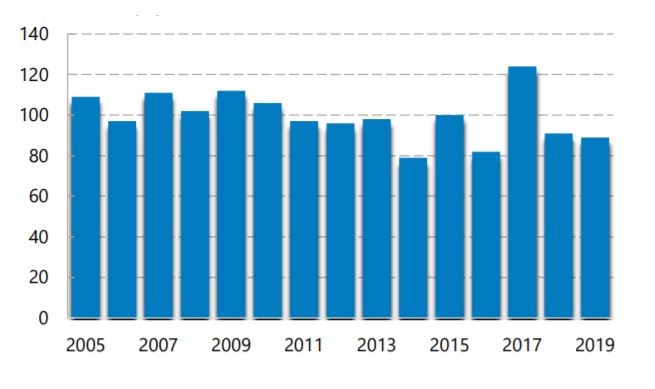 Figure 2. Fatal occupational diseases with exposure to mineral dusts and mineral fibres (by year of death)

Over the next ten years or so, the number of annual deaths is likely to fall by about a half from 100. Then the phenomenon will continue to wane even further until 2050, after which there will probably occur only a few cases a year, unless new high exposures of those born after 1956 are found. 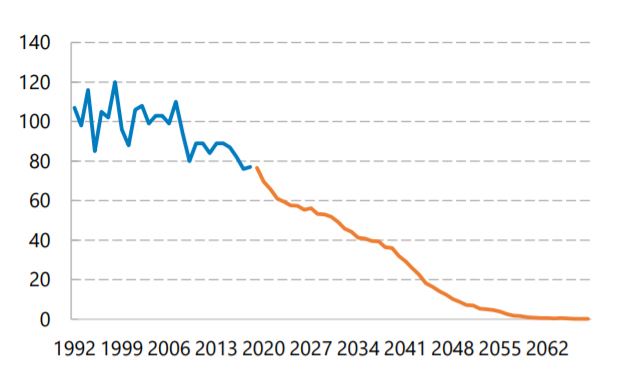 Figure 3. Actual figures until 2019 and a rough “conservative” prediction of the number of new fatal occurrences of occupational diseases due to exposure to mineral dust and mineral fibres annually (this time axis shows the year of occurrence). Visual predictive rendering of the data from 2019 onwards. The procedure applied to drawing up the forecast is described at the end of the analysis. 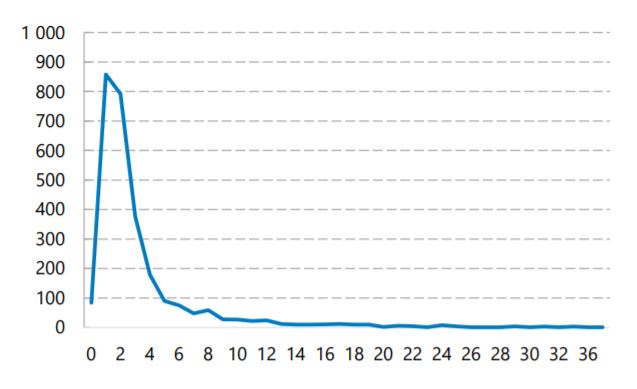 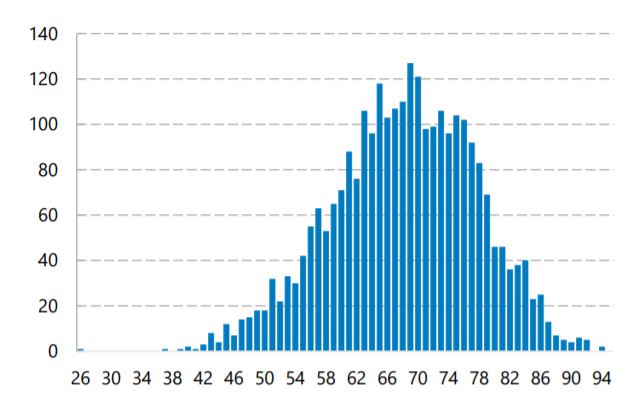 Occupational diseases and suspected occupational diseases due to exposure to mineral dusts or mineral fibres are still also being registered for relatively young people (the year of birth of the youngest case in the register data is 2000, but it has not been verified at the accuracy of the disease codes whether the case was specifically related to exposure to asbestos or not), so it is likely that some register data will accumulate up to at least year 2100, taking into account the very long delays between exposure and occurrence. This category of exposure to mineral dusts or mineral fibres also includes other exposure factors that have not caused fatal exposures to a large extent, such as glass wool, glass fibres, rock wool, mineral wools, wollastonite, talcum powder, gypsum , cement or concrete. These other very common groups of agents in the same exposure factor category should be remembered when comparing the number of all suspected cases of occupational diseases and, on the other hand, fatal occupational diseases.

Figure 6. All new cases of occupational diseases or suspected occupational diseases due to exposure to mineral dust and mineral fibres (incl. also other than fatal cases, and sources of mineral dust and mineral fibre exposure other than asbestos and quartz) by the currently known year of registration. The data for the time prior to the registration year 2005 is inaccurate, but indicates that the numbers are falling steadily. Even when looking at the latest years of registration, those born before 1957 still constitute the majority of the cases.

How was the analysis carried out?

All reviews have been carried out anonymously on TVK's register data without identifying any individuals or using any identifiable data. In the most accurate cases, the time attributes were processed with the accuracy of one year. No other information on individual persons was included in the analysis than the exposure factor code (in this analysis always mineral dusts or mineral fibres), the year of birth, the year of occurrence, the year of registration of the claim event, and for the most recent years, information on whether the case has been registered as a diagnosed occupational disease or a disease suspected of being occupational in origin, and on the deceased, the year of death. In the reviews of 2019, the annual amounts of ICD-10 disease codes referring to exposure to asbestos were listed for the claim events on which the code was available.

Methodologically, the statistics were compiled into a number of different 2-dimensional tables. Among them, perhaps the most interesting one turned out to be the table on deaths from occupational diseases and suspected occupational diseases due to exposure to mineral dust and mineral fibres according to the year of birth of the deceased and the year in which the claim event occurred. This data is relatively comprehensive and shows the number and profile of cases in a given age cohort as the age cohort concerned is getting older. Therefore, this table was used for drawing up a visual continuance into the coming decades, a “conservative long-term forecast” of how the figures develop, the projected development assuming that there are no unexpected turns.

The method used for forecasting is not scientifically accurate and it is not based on any mathematical model. The forecast first took into account the slow accumulation of statistical data by calculating the difference in the numbers on similar tables created with equal parameters in 2019 and 2020. The difference helped to estimate the recent years in the data to “the almost final level” by increasing the registered figures for the last 11 years by the figures corresponding to the additional accumulation of similar cases over the following 7 computational data collection years. The figures were added to the last years of data collection so that the visual profile of data in the cross table does not change substantially. Then, from the year 2019 forward, years were added as future projection according to the actual accumulation for the year of birth concerned (copied using the clipboard, row by row), so that for the oldest age groups the profile follows a similar trend. However, when adding the numbers, the background assumption was that by the time of 2030, generally men will live on average a few years longer than they do now (i.e., numerically, some cases were also added for older age groups than found presently). Individual figures were adjusted so that the visual presentation/profile between the current registered data and the forecast remains as similar as possible. Then a five-year moving average for yearly total of the forecast years was defined in the graph. The additions and outline were made in an Excel table, where it is possible to test different future scenarios as alternative models, if necessary. However, it quickly was observed that the impact of single individual cases is very small; the visual presentation in the cross table provides a broad outline of the forecast quite well, taking into account the other known uncertainties associated with the phenomenon.

In the analysis, we also tested a model in which average death rates were calculated over the following decades for those born in a given year, but such simplified models also heavily depend on the parameters used (on assumptions of, for example, the development of average life expectancy). Without more accurate modelling, a rough visual profile rendering may be less prone to errors, as, by varying the parameters, it is possible to make the computational model reflect trends that wane either relatively quickly or very slowly compared with the change already seen on the visual image for the past decades.